Why the future needs a brandname. 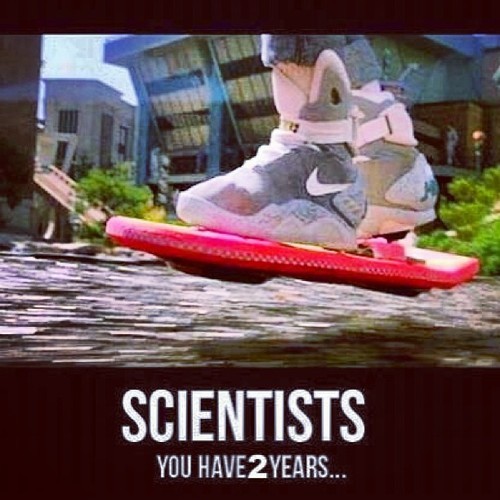 There is a disenchantment in our generation. We are still sitting on our lonely planet without space travel nor flying cars or at least hover boards. We are locked to the ground of technological advancement.

Although the Internet is a generation defining technological advancement, it feels like it’s stalled, to some even boring. Trapped in constant mental incest some say it became a bit repetitive, driven by an ecosystem flawed by it’s own survivor bias.

But the Internet aside I feel that the problem is even bigger, if you zoom out from the last years to the last decades. There is something fundamentally wrong with our society’s attitude towards science and innovation.

Reasons for Disenchantment: The illusion of progress

Our present day doesn’t feel futuristic and our future does not feel on its verge to come.

Looking past at the cultural artifacts left by earlier generations it feels like that the 50s, 60s and even the 70s had a different approach to their future. They believed in technologic advancements and even more they believed that they could actively invent it themselves.

“We have discarded a century of can-do ambition built on rapid advances in technology and replaced it with a cautiousness far too satisfied with incremental improvements.” ~Garry Kasparov in ft.com

According to Garry Kasparow we slowed down. We lost ourselves in incremental improvements and wars of efficiencies, instead looking for disruptive developments and ambitious new projects.

I personally do not agree with that view to the extreme Thiel and Kasparow put it. But i do believe that judging technologic advancement by the resulted IPO-size and not by social-impact leads to short-term thinking and repetitive patterns based on survivor bias.

Reasons for Disenchantment: The role of science

I believe our excitement for science is at an all-time low.

Watch popular media of the last decades and you will see the public sentiment/portrait towards people pushing technological development. If development is celebrated it is in form of “quirky science stuff” or “high techie-techie”. It is ok for talk-show-moderators to shout into the camera that they have no idea about math or science.

The public media presents characters – may they be fictionally or images of real people – which are either dorky scientists waiting for the ex-quarterback to solve everything with a witty common-knowledge-solution or the inventors are approximated to rock-stars or artists, the next best thing of a visionary persona our society wants to understand. 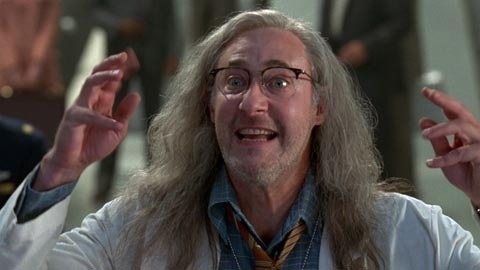 Our society has no big craving to invent radical innovation. We need to unravel a new interest in science and innovation – a new love for visionary/crazy projects tackling 20-year projects.

To make the future happen we need inspire ourselves as well as the next generations of creators. We need to communicate with the public and change this fundamentally wrong sentiment. 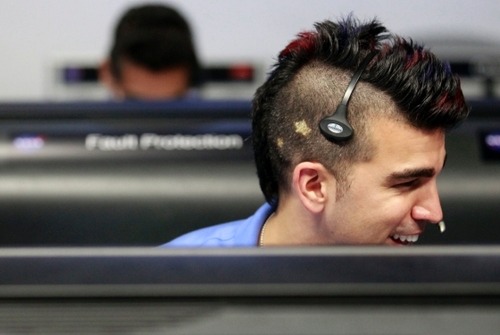 We need a utopic view of the future - once again.

Terra forming? Colonies on Mars? Flying cars? Prolonging life? Bio-mechanical robots? Mining Asteroids? We had all of this visions – as early as in the 60s! But our approach to the future changed.

Today our future is left to the weaves of time, and we became passive beholders no longer capable of believing we could change more than just a small incremental part of it. We believe today in in-deterministic models of a future too complex and too chaotic to interfere. Judged and understood only when you look back afterwards.

Peter Thiel explains this very well in his first class of his Startup Class. 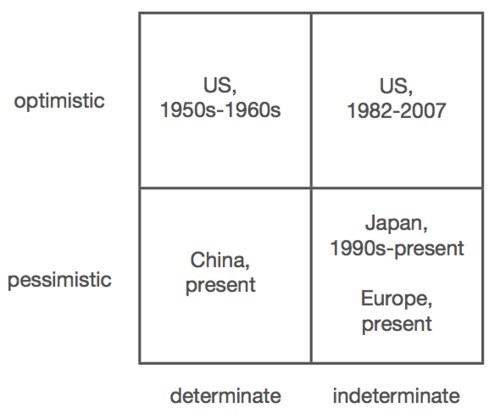 In the 60s strong leaders were an example we were willing to follow.

Would this be enough to set the public in the right sentiment? What about Obama stepping on stage and proclaiming a new age of pioneering. Let’s be honest. It would be ridicolous. We wouldn’t care. People do no longer believe in strong leaders.

To get back into deterministic thinking about the future we need to play the game of media.

We need to create a marketing buzzwords, which – correctly used – can be a positive thing. They create easily packaged concept and framework, curate an easy-to-consume approach to a complex topic. They create external authority useable in superficial discussions.

We need to create hype around brands people want to attach, give space to share ownership, identify with, to communicate and to believe in.

The media played irght can be used as an accelerator in an re-enforcing loop.

Curators (brands/movements) promote creators (inventors) to communicater (journalists/socialmedia) who transport to a large group of consumers (the public). Out of which ultimately more support and more creators will come. 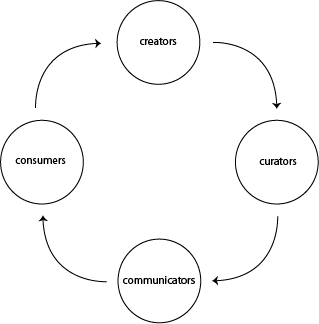 A brand-name for our future

To simplify communication we need brand-names around movements. I believe to give a brand today credibility we need more than strong leaders, good claims and a bold vision. Especially when it comes to science related topics we need models behind it.

The good thing… We have all those brand-names and models since years.

Ray Kurzweil’s arguments in his model of Accelerating Change that technological development is - like biological - an exponential pattern of evolution.

Of course to any good model there are countless examples when it does not work and there are dozens of points of criticism.

But to create hypes we do not need flawless models. We need good enough solutions people can affiliate to, people can believe in.

Something simple enough to communicate, something complex enough to believe in it. Combine a model like this with a strong brand-name and you got a winner.

A Brand-name: The Singularity

“Singularity, the wet dream of IT geeks” ~anon Internet Commenter

Singularity as a brand is about to break to mass-market in 2013. I believe this is a good thing. And we should use this.

For those who don’t know it yet: the concept of technological singularity (as an event in technical evolution) is based on a paper by Math Professor and Sci-Fi author Vernor Vinge from ‘93. The concept defines the idea of technological development until we are able to invent AI technology that will be capable to take over the job of innovation from there on. Ultimately this concept leads to a potential destruction of all of humanity.

“Within thirty years, we will have the technological means to create superhuman intelligence. Shortly after, the human era will be ended.” ~Vernor Vinge

It a lovely concept to think about it - isn’t it? An AI clever enough to outpace human intelligence and compete with us. Still stupid enough to fall into the same anti-logical patterns of false reason, short-term efficiency thinking and eagerness for destruction.

Ray Kurzweil calculates the time of the Singularity based on his model of exponential technological advancement around 2045. 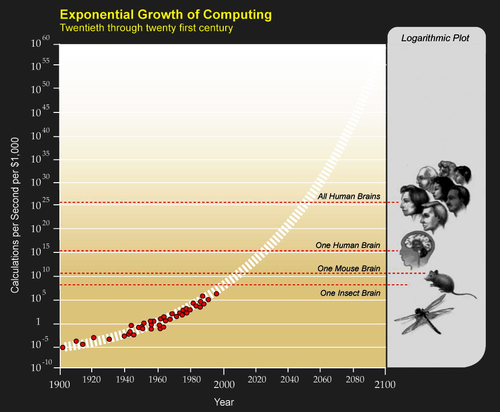 Singularity as brand-name for the future.

But more there is more to this term apart of absolute destruction of humanity. This aspect is just a by-product, a good opener to approach the topic. Singularity became a buzzword for a new movement popularising science. And it’s about to break-through to mass-market

When people use it in this context they don’t speak of an event of total destruction, they speak about generation defining future technology. Technology that has the potential to affect people in the count of billions.

They speak about a new age of pioneering.

Used as a brand-name, movements formed around it, organizations start, universities launch.

And yes, of course, some will commercially exploit this brand better than others. But why not. Commercial interest is the fastest driver for optimizing efficiency and speeding up developments.

The most fascinating aspect about the Singularity movement is that it’s critics come as well from technological fields. And I truly understand it.

When I put my craftsman-hat on, I see a disproportional hype creeping towards mass-media in the last few years. A hype used by half-baked professional speakers to affiliate themselves to world-thinkers and thus double their keynote-salary.

But when I put my marketeer-hat on I see more. I see a brand-name to use. I see a way to communicate big ideas to the public. A way to inspire a new generation.

I hate hypes and cargo-cults around topics like everyone else. But if we need this to inject a new sentiment into the public - let’s do it. If we need over-hype and over-cheering - let’s go for it. And if a brand-name is needed to market the future - i am in.

Rather than to fight this brand-name I encourage using it and creating more brand-names.

A short commercial break: Watch the space around Pioneers Festival - They blew me away with their event in 2012 and now again with their concept for 2013. They are the only large scale event format I know that approaches technological pioneering as a whole and doesn’t overly focus only on the web technology of today.

We need to inspire the future.

While I am sure that the brand Singularity will hit mass-market this year 2013. I believe we will need a lot more brand-names like this.

I want that a founder can proclaim that his company is on Mars in 10 years.

Where people can speak about radical life span extension. People my grandfather would have – in best case – sent off his lawn.

A future where people can dream about mining asteroids.

Our generation got a huge challenge. We living in a new age of pioneering. And to facilitate this we need to set a new tone towards technological development, a new approach in thinking in our society, a new proud awareness of science.

If playing the game of media is what we need. Let it be so. If we need characters, brand-names and storytelling - I am in. If we need to attach to hypes around over-used buzzwords. Why not.

I honestly believe and I am willing to scream this to the world: We are on the verge of a new age of pioneering. We live in the most exciting generation that has ever been.

We need excitement and communication as much as we need technical advancement and science itself.

Let me know your thoughts on the far future. Your attitude towards the hype around the brand Singularity. As usual you can reach me via twitter or join the discussion on HackerNews