About the “other” Startup Hubs.

There is an energetic discussion going on in the Web-Tech Startup World. Each city wants to know - “Can we become the next Silicon Valley”.

It’s a cliché of a question that’s getting incredible boring, boring but still needed. Entrepreneurship and Innovation still needs fostering in our society. Ecosystems are a strong aspect of that.

In most discussions people focus on the missing spots in their local ecosystem. They try to replicate the currently best working system, ignoring their potential Survivor Bias. They focus on what’s missing: VC capital, exits, the will of entrepreneurs or angels to take more risk.

Björn and Max of Startup Genome came (based on quantitive analysis) just released their yearly update to their Startup Ecosystem report and thus creating a update top10 list of international Startups Ecosystems: 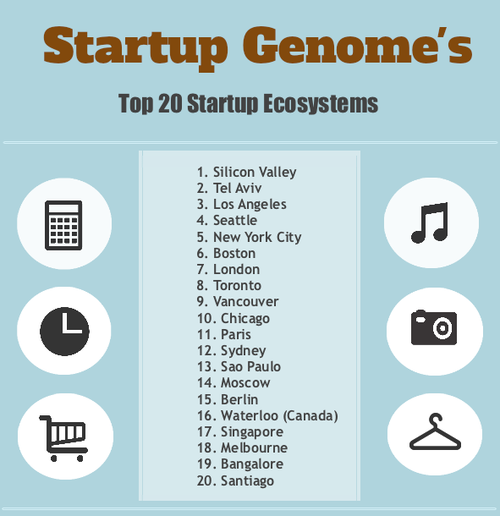 The accurancy of this list does not really matter in my opinion. It’s more about a rough feeling where you city resides in the Startup World.

If you are not in this list, you are most probably nowhere.

So if your city is not in this list. What to do? According to Brad Feld it can easily take up to 20 years to establish oneself into this list.

Startup Hubs tend to compare themselves with the status-quo of their competitors. They try to emulate e.g. Silicon Valley and beat them in their own game by doing what they do.

But Startup Hubs - like Startups - have phases of maturity.

If Startups follow the patterns of later stages Competitors they usually run out of ressources and die. I tend to believe that Startup Hubs have similar problems.

The most common approach of Startup Hubs is to tackle all missing aspects at once and improve them step by step. All of a sudden you end up with more problems than time and energy you have got. You scream for state support to get more ressources. You are competing on all fronts, while your traction is benchmarked with leading startup cities. People tend to compare speed and not acceleration. You are pretty much in a loosing position.

Gabriel Weinbergs compares these approaches to leaky buckets. Systems with more holes to fill than you got time.

Fact is Startup Hubs can’t compete on all angles at once and especially not all in the same way.

This would just maximise game dynamics and enforce the (power law) distribution among themselves in the ranking. Startup Hubs need to disrupt the system.

Since Silicon Valley is the #1 ecosystem it is assumed that other ecosystems will perform better if they differentiate themselves from Silicon Valley and establish their own strengths. – Björn Lasse Herrman Startup Genome Project

If you think of Startup Hubs as platforms the most common best-practice is to niche on your strongest qualities in the beginning to get initial traction. Focus on something small where you have talent in, create critical mass on demand / supply for this focus, create network effects and use this initial traction to move forward.

The number one job of a Startup Ecosystem

The reason for the typical over-stretching of ambition might be rooted in a very simple miss-understanding the Job of a Startup Ecosystem.

It is NOT the job of a Startup Ecosystem to make sure founders get everything they need along their companies lifetime, that’s the damn job of the founders themselves.

The job of an ecosystem is to catch, inspire and accelerate talent. Get the idea-makers while they are still energetic, provide them knowledge, uplink and acceleration. Especially in early phases I would not rate Startup Ecosystems based on their output in exits or funding. That are indicators that come by later, when the hub is by far more mature. I would rate early stage hubs based on the fact how wide and talented the can get the base of their ecosystem to be.

Basically start ground up. Go as low-level as possible.

“But what will they do if their ideas are starting to grow and need more money” - Import money, go to accelerators, do whatever you need to do and be successful. People who sit and wait and blame the system around them are not entrepreneurs, they are lurkers.

Entrepreneurs are the leaders. Everyone else is a feeder. – Brad Feld

Send your entrepreneurs away.

One predominate factor in many countries and ecosystems is the fear of entrepreneurs leaving the country to start or grow their business somewhere else. While I understand this on a macro level - local tax systems supporting national growth - i cannot understand it on an micro level.

To me it sounds like a later-stage problem which people try to solve too early. If a startup hub is yet in early phases many good people will leave - no matter what - the goal is not to stop that by wrong-aligned incentives, throw cash at them or bind them with laws or contracts. The goal is too keep the backchannel as good as possible, get their learnings and keep them active in the community.

The role of the government

Some people believe it’s the job of the government to create Startup Hubs. The dangerous part. In many cases the people, who believe this nonsense are working for the government. Brrrr.

The job of the government is to support a Startup Hub. A good start would be to minimize their own blockage - make it easier to form companies, simplify law and tax systems, minimize laws that put entrepreneurs under personal risk, make it desirable to invest in companies.

I don’t mean this in disrepect to the important role and huge success of state support systems. But I personally believe that state money as investment is the purest form dump money. I can mostly speak of Austria, but the absurdity of having an “expert panels” who should cover 4-6 industries and decide at whom to throw 200-800k is ludicrous, if not dangerous.

Large scale investments by the state in a few early stage startups creates an imbalanced market where founders align to the state instead to the private market (customers or angels). Ultimately leading to an army of zombie startups with wrong validation and too much runway to die and too little to live, lurching half-dead in the search for more state-funding. F*ck that, get me a gun.

Investments by the government shouldn’t be in the startups but in the infrastructure.

I’d personally recommend looking for where the community really is and try to support their multiplying activities (e.g. in Europe projects - AMONG MANY OTHERs - like Starteurope, Railsgirls and StartupWeekend) and focus on them.

Any state investments for early stage should be spray-and-pray - the best practice here is http://startupchile.org/ - they additionally focus on important international talent.

As said I mean above suggestions without any disrespect to the important work of state funds, it’s just inside-out amateur view coming straight from the field.

Startup hubs need to know the phase they are in and try to act accordingly. Governments can’t lead and need to support scene activities and focus on proven multipliers. Instead of locking entrepreneurs in and trying to recreate and biotope before there is enough nutrition for it, appreciate people leaving to learn and try to keep them strongly tied to the local community as a source for international knowhow, network and ultimately money.

I am pretty sure I am missing millions of aspects. Please let me know your thoughts via twitter @andreasklinger.

Until then. Have fun. Creating startup communities is awesome - Andreas